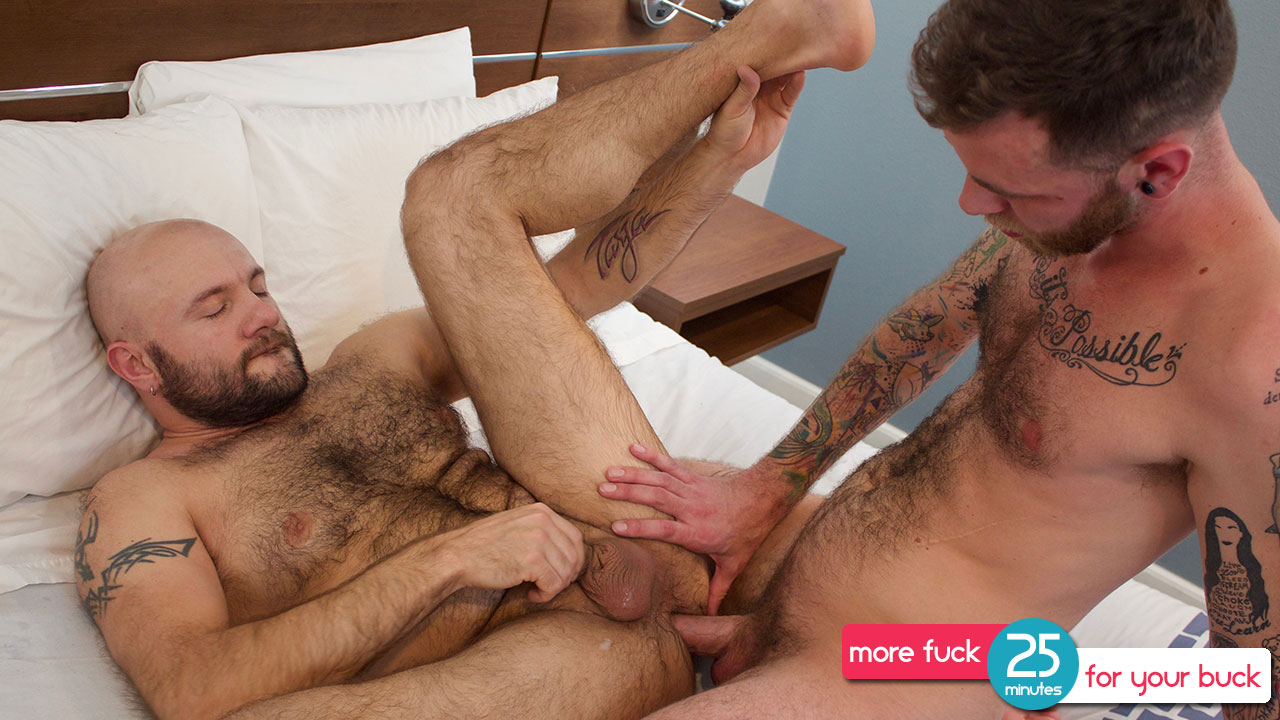 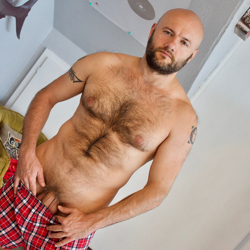 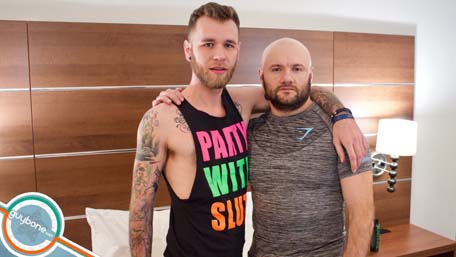 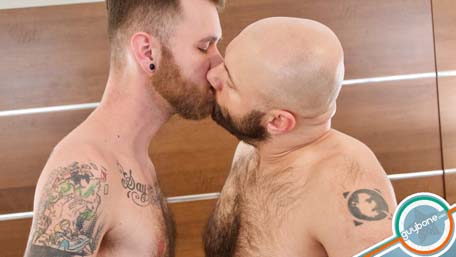 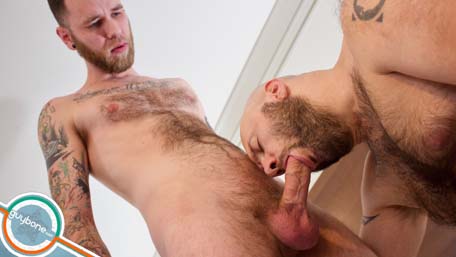 Damn! What a couple of hot firsts! Russian daddy stud Thomas had previously shot his solo audition, but this marked his debut fuck scene. And Ryan Powers was totally new to GuyBone and making every head turn with his ridiculously sexy everything. The cute face with the puppy dog eyes, the furry otter body inked in tattoos, the giant cut cock begging to be blown. Thomas wasted no time getting his young costar nude and rock hard. That big, delicious boner slid down his throat like it was meant to be there. They had such hot fun together, they ended up with an extra 5 minutes of footage. That's more fuck for your buck!

Ryan lubed up his cock with SPUNK and gently nudged it into Thomas' butt condom free. Daddy reached back and caressed his boy's bountiful nuts as his asshole was stretched by that hefty shaft. Hearing them both moan softly was such a turn on and seeing them together was like walking into an after practice fuck session with coach and player.

Taking a tiny intermission, Ryan rolled Thomas' legs and ass up so he could eat the cum he'd just deposited out of his daddy's hole. Normally a tad too kinky for me, I was totally open to and enjoying this spectacle. Ryan made it look really fucking hot, licking and sucking his load from Thomas' used ass. Before I knew it, the intermission was over and he was back inside the masculine bottom, fucking him in a super sexy downward angle position. It bent his big, already curved cock in a wonderful way that separated his nuts around his shaft and showcased all of his junk just right.

Thomas was begging for more and Ryan was giving it without hesitation. These two were hot together. Not a lot of spoken words, other than the occasional "fuck" and moans, but it was evident they were into it and thoroughly enjoying it. Sometimes a language barrier hinders, but in this case, Thomas didn't need to speak very much English to convey what he wanted and how much of it he craved.

After eating his hole again after a round of fucking, Ryan laid back and let Thomas devour that cummy, ass juice covered cock on a second intermission. If I were Thomas, I would have been torn too, do I suck it or sit on it? Both! After he got it nice and wet, he took a seat on that flagpole of a cock and rode it like a pro. They kissed sexily, lips smacking and tongues twirling, as Ryan stuck his raw dick up inside Thomas repeatedly. The froth began to foam up and drip from Thomas' ass, trickling down Ryan's shaft. The extra wetness must have felt fucking amazing, because as promised, he came a second time. Thomas stood up just in time to see a few droplets shoot from Ryan's piss slit and then he took a seat again, enjoying being bred once more.

It was Thomas' turn to get off. Much like I would do in his situation, he got on his back and jerked furiously while gulping down Ryan's still stiff cock. Sucking on that boner, feeling and tasting it in my mouth, would have driven me over the edge, and it did for Thomas, too. He shot a nice load all over his hairy belly and was utterly satisfied. These two proved you don't have to speak the same language to understand each other's bodies in bed.