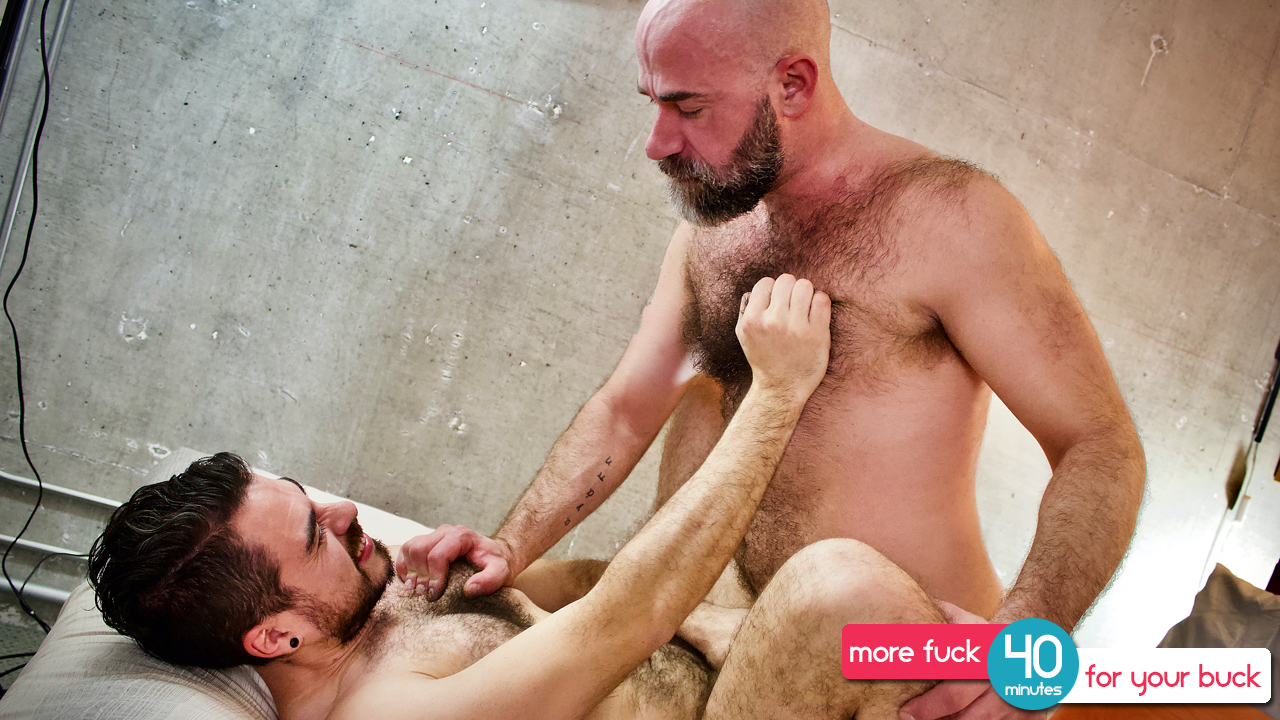 Smoldering, seductive Adam will surely give you a surge in your shorts. Scruffy, scintillating, hairy, handsome, and incredibly smart. He's the chattiest GuyBone Guy by far, but he's so fun to listen to, no one's telling him to shut that sexy, smiling mouth. 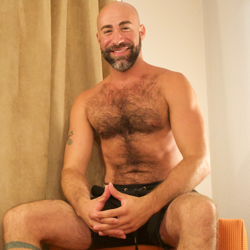 WOOF, talk about the perfect masculine daddy otter, Damon Andros is fucking sexy and we are rock hard for him! That smooth, shaved head and those dark, make me melt eyes and his handsome beard and furry body and big, curved cock. Grr! 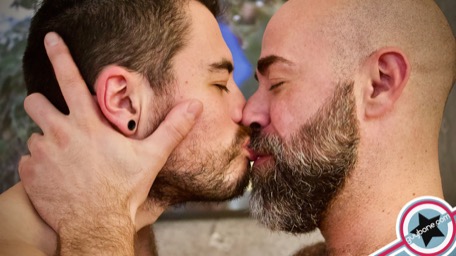 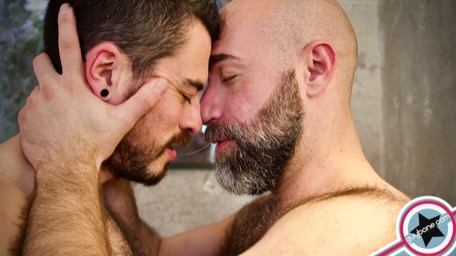 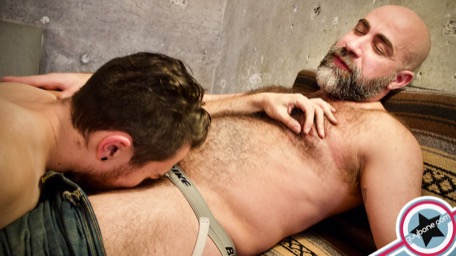 â€œCame to service daddy, huh?â€ With Damon asking that question of Adam, it was evident the tone this scene was going to take. One of daddy and boy, worshipping. So much instinctual father/son sexual chemistry (they arrived wearing unplanned matching Bike jockstraps), they ended up with an extra 20 minutes of footage! That's double standard length and definitely more fuck for your buck!

Adam started with Damon's musky, furry pits, licking and kissing his way around from one to the other, getting that hot daddy scent all over his beard. His tongue teased and flicked Damon's steel nipples, his service skills on full display. Damon's dad bod was out of this world, complete with shaved head, salt and pepper beard, and hairy as hell belly. They kissed sensually, a dad showing his boy the ropes of manhood. Both were boned up inside their jockstraps, but Adam had to get Damon out of his pants first.

Adam smelled Damon's pulsing cock through his jeans, unzipping them to get an even closer whiff. He stroked his own stiff dick as he growled attraction. He pulled Damon's pants down enough to expose his jock bulge, burying his face and tongue between his dad's legs. He tweaked his nipples and toyed his tongue around Damon's bulge, finally pulling his pants off completely. Damon's dick twitched inside the fabric prison, begging to be set loose.

With the reveal of dad's balls, Adam nearly creamed himself, whimpering his excitement, craving to lick them. Damon allowed him and Adam ran laps around those hairy nuts with his tongue and lips. He sat back and admired dad's big balls as Damon eased his boner out of his underwear. Adam knew he had to taste that cock, his curiosity driving his every desire. But Damon wouldn't let him be led by impulse. He was in control. He was teaching, coaching. And he wanted Adam to go slow, taking his length all the way down his throat on the first attempt.

Adam was successful, swallowing that dad dick, nursing the girth. It bounced to and fro when he let it plop from his mouth. Damon continued the dad talk while Adam's mouth was full. He fed his son his shaft and encouraged him to milk it. Adam had one job, making daddy feel good, and he was a star employee. Damon was so proud of his boy. Their dialogue was top notch, edging each other with their words.

They showed off their boners as Adam inhaled all of Damon's jock smell. Then daddy instructed son to sit on the back of the bed so he could smell his jockstrap, as well. Damon breathed in Adam's gym jock odor and spit on his boy balls. He kissed and licked them, fit them all in his mouth and sucked them. The sound of his mustache scratching against Adam's ball pubes was deafeningly sexy. He returned the nipple worship, which was Adam's absolute favorite. He spit on his nips and furry chest, tongue fucked his titties, and nursed like a pro.

Adam was rock hard and Damon wasted no time gulping down his thick dick. He gave him stellar head as he rubbed his equally hard nipples. Adam was in heaven. Daddy wasn't done getting his dick sucked, though. Lucky for him, he had a good boy, a hungry boy, at his disposal. He stood on top of the headboard and fed his big dick to Adam. He flicked his nips and Adam devoured his dad dong. That beast of a boner looked so fucking good against Adam's bearded mug and inside his mouth.

Damon ordered Adam over to the second bed, jock off, hairy ass up in the air. The boy obliged, of course, and Damon spread open his cheeks and spit in his hole twice. He claimed ownership of his hairy asshole and made Adam shake it to delight him as he played with his swinging hard-on. He got right in there and rimmed the boy, burying his tongue as deep as he could in Adam's crack. He salivated on the boy's taint and balls before scooping him up to spoon, a finger on his nipples, a finger in his hole. Dad's boy was ready to bareback bottom.

He bent Adam over in doggie and teased his hole with the head of his turgid cock. He eased a bit in at a time and then gave his boy what he wanted, the whole dick. They were one, united in sex, lubed with SPUNK. Damon's dick fit perfectly inside Adam's warm anus. Their hairy bodies hugged, their sex organs entwined. Dad was deep in his son's hole when he mounted him to show off their sex from behind. Adam asked to smell Damon's pit while he fucked him raw. The moan he gave out echoed into their chorus of moans when they hopped up to their knees to play with each other's nipples and erections.

It was time for the boy to ride dad's dick. They were both stiff as fuck and Adam edged Damon before putting his bone back inside his hole. He slapped it, jerked it, spit on it, then climbed aboard. He bounced on the dad boner beautifully, letting it fill every reach of his hole. Then Damon took over and railed him, thrusting up into his guts. He spit on his chest, which Adam loved and requested more of.

They agreed they both wanted Damon to fuck Adam on his back, so he flipped him over while staying balls deep inside him. He spit on his dick to continue the wet ride and humped madly. He beat his boy's chest and encouraged him to hit back. They slammed fists against each other's furry pecs, grunting like brut cavemen. The sex was wild, raw and animalistic. There was no stopping. Damon spit on Adam again and annihilated his hole, much to both their delight.

Bare feet aimed to the ceiling, Adam gave up his hole a final time to daddy Damon. He'd known from the beginning he wanted a facial at the end. They walked over, boners swinging, to the desk chair and Adam jerked a hot load out of Damon. He stood up when he was ready to explode and shot his sperm all over his son's face, beard and mouth. Adam tasted it and loved it and had his craving satiated. Then they traded places and Adam beat his meat to completion, spraying his seed all over daddy's furry chest and bearish belly. Boy batter painted Damon's fur and Adam rubbed it in with the head of his pulsating prick. They moaned and grunted their masculine tones and all there was left to do after the fucking incredible, hardcore, bareback pounding, was fade to black.