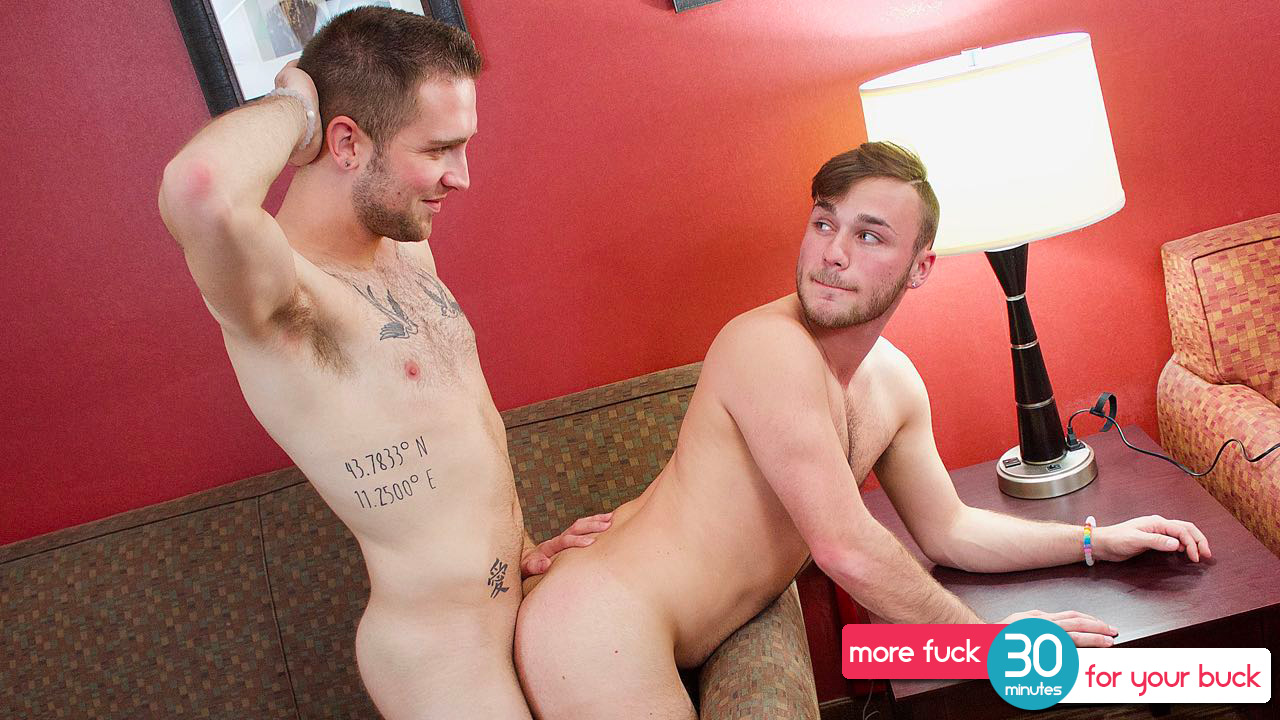 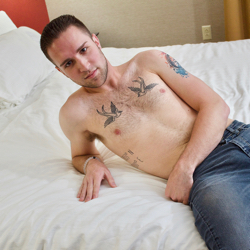 Clinton is one helluva hot Midwest guy. They know how to grow 'em right in the heartland and Clinton is proof! He's tall, lean, and tatted up in all the right places. 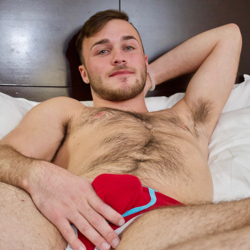 Tanner is a pocket-sized, Midwest hottie. A sexy little furball, he has the most adorable smile and make-you-melt eyes that are as cool blue/green as the Great Lakes. He's a talented bottom with a mouthwatering bubble butt and knows how to suck a dick with the best of 'em. 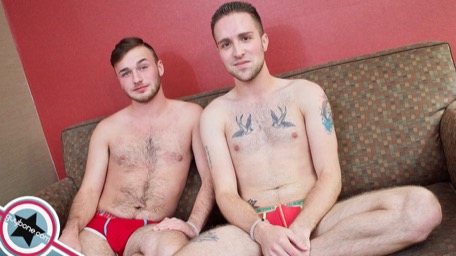 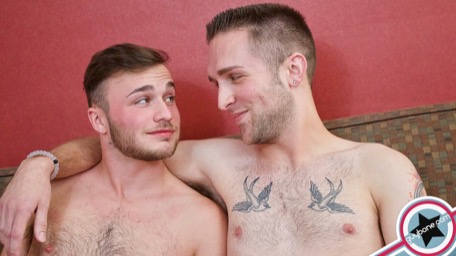 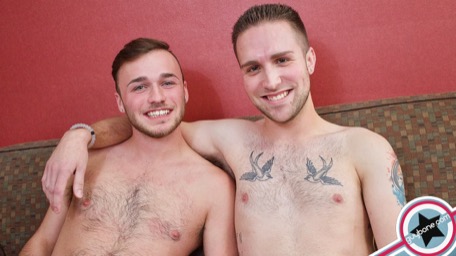 Traveled to the midwest to visit family and doggone it, couldn't leave my camera at home. I'd met both these homegrown hotties online and couldn't wait to film with them on their turf. Tanner was a furry twink with one of the sexiest bodies and cutest faces. And Clinton was a tatted stud with plenty of scruff and a salacious pole in his tented underwear. Both of these boys had killer smiles and I was rock hard from the moment I said â€œaction.â€ As were they. So much so, they ended up with an extra 10 minutes of footage. That's more fuck for your buck!

They sat on the couch in their colorful chonies, making out and rubbing each other's bulging groins. Their hairy bodies were so hot, sliding against the other, jostling, feeling, exploring. Tanner laid Clinton back and climbed on top of him, releasing the beast from his briefs. It was big, throbbing, and begging to be sucked. Tanner took the hard cock in his talented mouth and swallowed it whole. Clinton's balls were beyond full, aching to release their pent up load.

Clinton was in bliss instantly. Tanner slobbed his knob, tasting every inch of his raging erection. Clinton's perfect guy next door body sprawled out on the couch, tall as could be, his tattoos catching my eye and making the whole picture even sexier. And those big, bare feet. FUUUCK.

I couldn't believe how huge Clinton's nuts were. I get hard every time I look at them, write about them, think about them. They're so fucking sexy. And the way Tanner tugged on them while he blew his costar was just excellent. Big, thick and veiny, Clinton's cock was just as perfect as the head he was receiving.

He was up next, returning the favor of sucking dick. He pulled Tanner's handsome cut cock from his trunks and got it nice and wet. The oral noises Clinton makes and the amount of spit he must use when blowing a dude is one hot combo. I get rock solid just hearing the sounds he makes. Tanner did, too. Although his probably also had something to do with the feeling of Clinton's wet lips and tongue all over his shaft.

Clinton jerked and sucked Tanner's boner and plopped his hairy nuts in and out of his mouth. He pulled both of their underwear off and flipped Tanner's legs toward the ceiling so he could munch on his butt. He drove his long tongue deep into Tanner's fur patch, making the soon-to-be-bottom pant and whimper. Clinton alternated between eating Tanner's ass and sucking his loose balls. Then they moved into a hot 69 where Clinton could still lick hole while Tanner sucked his big, beautiful bone. Fuck, I was just as ready as these two to get the fucking underway.

It was about this time I realized both my midwest men were wearing the same bracelet. What are the fucking odds? Had they been to the same festival or retailer to obtain them? Never having met prior to the shoot, I couldn't help take these small plastic accessories as a sign that these two were meant to be costars. And what fantastic costars they were!

Lubed with SPUNK and slamming away at his ass, Clinton's dick was destroying Tanner in the best way imaginable. Clinton's athletic ass looked amazing as he humped hard. Tanner took that huge tool like a champ, his ass cheeks rippling every time Clinton smacked them or thrust into them.