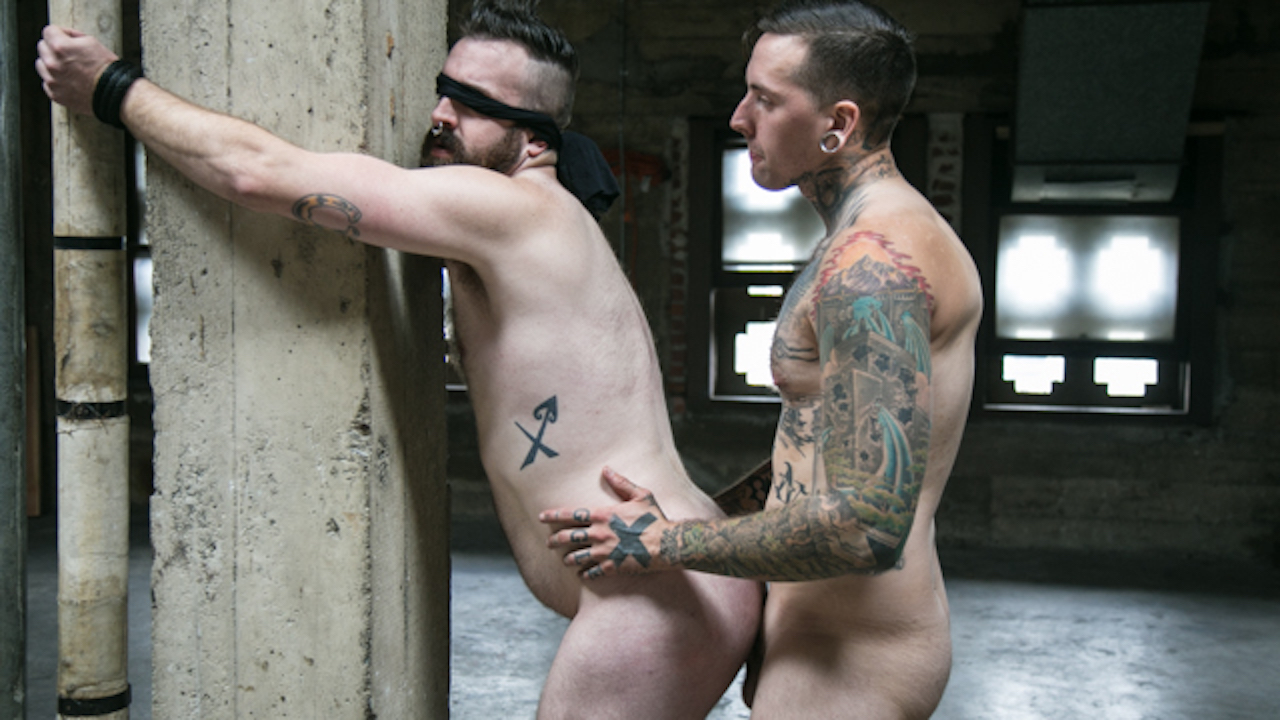 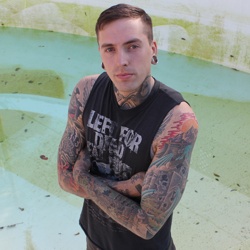 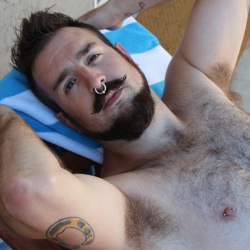 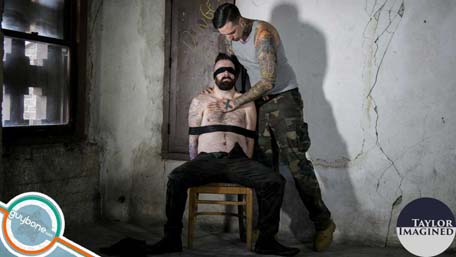 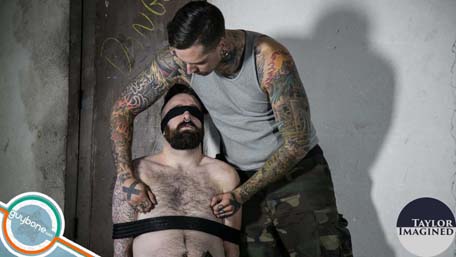 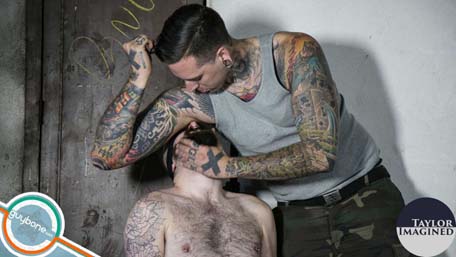 What has Runner done to deserve this kind of punishment? Blindfolded and tied to a chair in what looks like an abandoned building. Wait, here comes Ruckus. Punishment or pleasure? You be the judge after watching Runner's first action scene.

Ruckus wastes no time slapping and smacking Runner while he's tied to the chair. He buries Runner's nose in his musky armpit and Runner sniffs and licks the sweaty hair. Like a good prisoner. Ruckus rewards him with a kiss and a hand down the pants. He fondles Runner's junk while his pit gets serviced more. Then it's off with Runner's pants to reveal a hot jock strap.

Ruckus firmly pounds his tatted fists against Runner's hairy pecs. Then he tweaks his nipple rings enough to make Runner cringe. He pulls his cock and balls out of the jock and orders Runner to jerk himself, even spitting on his dick for lube. Runner does as instructed and plays with himself while Ruckus pokes and prods at his vulnerable body. Then Ruckus pulls his own cock out of his fly and starts stroking. He loves watching the helpless Runner beat his dick while bound and blindfolded. His cock swells immediately and he moves forward to put it in Runner's unsuspecting mouth.

Runner gulps down that boner faster than you can believe, balls deep to his bushy brown beard. Ruckus forces his head down on his dick, which makes Runner's cock throb with excitement. Ruckus takes notice and drops to his knees, offering a hand to the tied up Runner. He jerks his hardon while continuing to play with his own boner. He lubes Runner's shaft with SPUNK and pushes on his prostate with his thumb. Runner loves it. He braces himself on the chair and enjoys the heavenly torture. Ruckus is surprised to hear Runner doesn't want to cum yet. He wants to be fucked.

Ruckus gets on his knees with Runner on all fours in front of him. He feeds his stiff cock to the hungry prisoner while holding tightly to the rope that binds him. Ruckus' low hanging nuts look incredible draped out of his fruit of the looms and over his camo pants. His thick veiny cock wet from Runner's slob job. After teasing him and making him beg for a good fucking, Ruckus lubes up and puts on a condom and fucks Runner in the doggie position he's already got him in.

As soon as his shaft enters Runner's hot hole, Ruckus removes his belt, forms it into a loop, and begins spanking those milky white butt cheeks. Lots of ass slapping to be had as Ruckus pounds Runner's ass from behind. Runner bucks backward to meet Ruckus' thrusts, crashing his ass against those loose balls. He shoves Runner's stomach down onto the cold concrete, fucking him deep and hard in a push up position. Runner moans like an obedient bottom and Ruckus slams into him with more fervor.

Big thank you to our friend and photographer Taylor Imagined for providing the very hot stills!