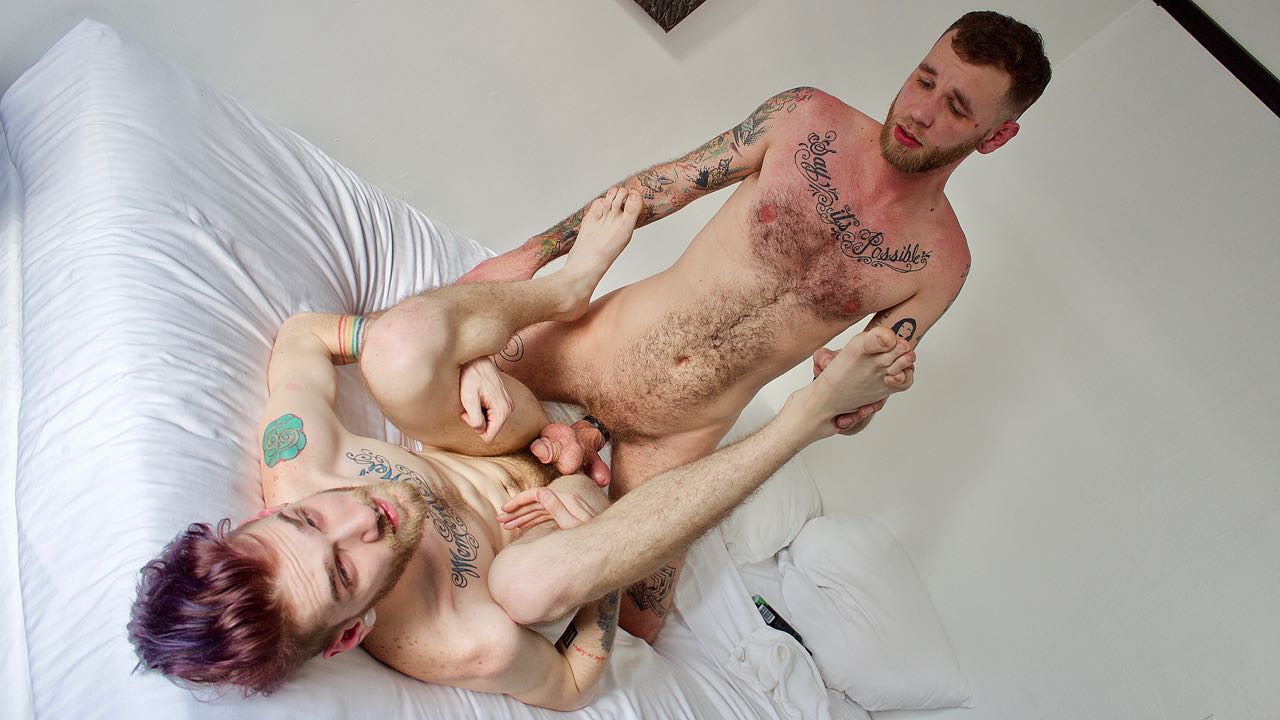 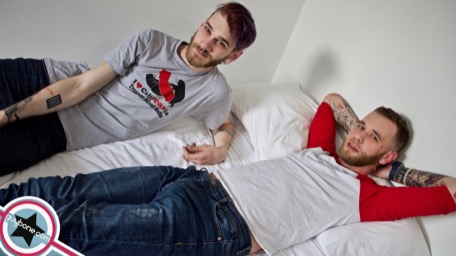 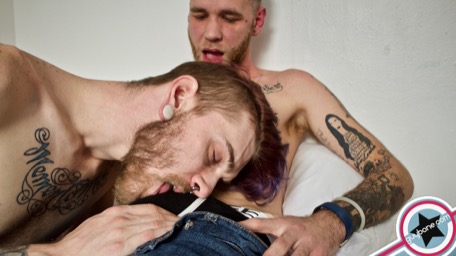 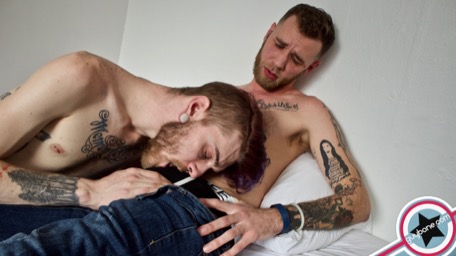 First off, let me apologize for holding onto this scene for so damn long. It's the nature of the beast when you film a ton of content with one particular model, case in point, Ryan Powers. He showed up last year and we just went bananas for this furry fucker. We shot so many scenes with him, we had to distribute the content evenly. That meant, depending on his costar and how recently they'd had another scene release, some of his stuff could sit on the shelf for a bit. And here we are. Ryan and Shane Flip Raw. Woof. These two had a dynamic chemistry. Tatted, pierced and bearded otters having a hot bareback flip fuck session. What could be better?! And definitely worth the wait!!

They started off kicked back and barefoot on the bed. Their hands roamed. Their lips smacked. Their dicks throbbed inside their jeans. Shirts were removed to reveal even more sexy tats and piercings and furry chests. Ryan undid his fly so Shane could sneak a peek of his bulging undies. He nibbled on Ryan's growing rod through the fabric, wetting and exciting it even more. He released it and slurped it down his throat. Ryan's face said it all, Shane's mouth felt fucking amazing.

He gently massaged his neck as he fed him his steely, veiny shaft. Shane admired his thickness and teased the head of his cock against his beard before gulping it balls deep. He unzipped his own pants and pulled his prick out. He, too, was raging hard and impressively hung. These two were so similar in so many mouthwatering ways.

Their mouths met again before Ryan inched his way down Shane's thin frame and took his boner between his ruby red lips. He spit on his cock and sucked the fuck out of it before moving back to Shane's mouth with his own hardon, stuffing it down his throat while on his knees. The view from behind his hairy ass was spectacular as he humped Shane's scruffy mug.

Ryan's cock glistened with SPUNK Lube as he slid his gargantuan girth inside Shane's tight back door. They eased it in, but decided Shane sitting on it might work better to begin. This new position was a win for them and for the camera, as it showed Ryan's fat cock working Shane's eager hole in an even hotter light. Shane rode that cock well, getting aggressive and attentive. They took turns in the driver's seat. Ryan laid Shane on his back and entered him fully. He drove his delicious dick deep inside his costar and screwed him senseless.

The raw fun continued as the guys flip flopped roles and Shane took over as top. He worked his meaty cock into Ryan's hairy hole inch by inch, making his costar whimper with anticipation. His tight torso clenched as he began pumping back and forth, giving Ryan everything he had. When Shane's happy trail met with Ryan's hairy ass crack, I was in bliss. These two were so hot together!