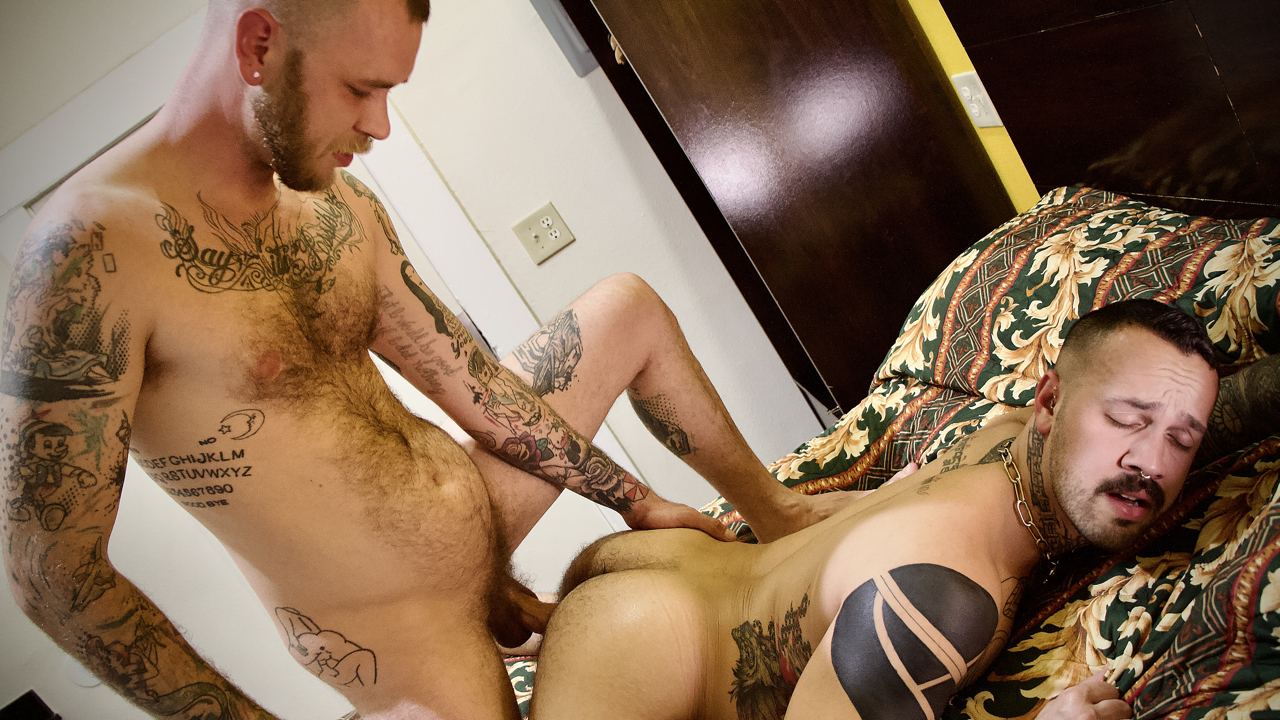 Dev Tyler is seriously one of the nicest guys I've ever met, which makes him even sexier when listing all his attributes. His boy next door smile will make you crush while his bangin' athletic bod gets you rock solid. Hairy in all the perfect places, Dev is hard as steel in front and juicy yet firm out back. 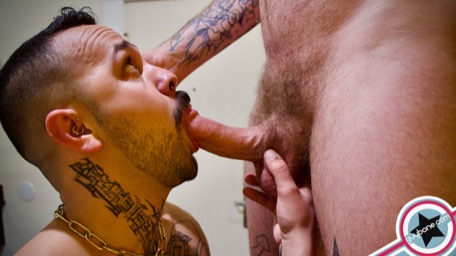 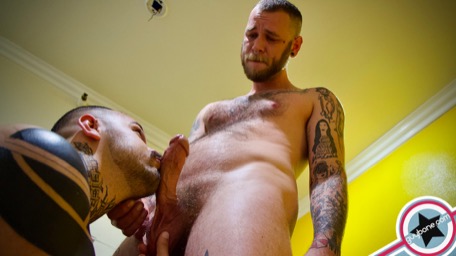 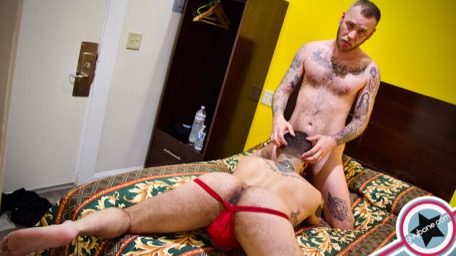 Seedy hotel room, check. Sexy pent up studs, check. It’s a recipe for success when Ryan and Dev get together for some bareback fucking after tons of sexting about it. Starting with an armpit sniff and a sultry smooch, the guys wasted no time stripping out of their clothes and getting better acquainted. Literally years in the making, Ryan and Dev had been wanting to get together on camera for so long. And now they had arrived in the moment and were both bricked as hell. Dev took Ryan’s big, curved boner in his mouth and worshipped it wet and deep. Their furry, tatted bodies looked perfect together as they began to live out their fantasy.

Dev devoured Ryan’s dong as I lay underneath them to see all the sucking action. Dev drooled strands of spit as he serviced his bud’s big, veiny bone. He tongued his hefty balls and gulped down his gargantuan schlong as he stroked his own stiff one.

Dev bent forward so Ryan could rim him and jerk him while he still wore his jockstrap. Ryan’s talented tongue made love to Dev’s hairy asshole and their moaning was next level. Ryan ate that ass to perfection, driving Dev absolutely wild. This was a meal they’d both been waiting eons for. With his hole wet and ready, Ryan rolled Dev on his back and aimed to enter him.

His ridiculously erect dick slapped against that sweet entrance and teased Dev’s taint. They were both beyond ready for a roll in the sack, so with some extra spit, Ryan eased his large manhood inside Dev’s tight hole. They kissed as he entered him completely, his balls resting against that furry, welcoming back door. He began to fuck, thrusting deep and purposeful, picking up speed as Dev loosened around his shaft.

Ryan hugged Dev’s hips as he plugged his hole. They were grunting and sweating and getting totally animalistic. Completely in sync, their bodies made to be with each other, Ryan was overcome with ecstasy and needed to blow his load. He pulled out and painted Dev’s delicious ass, then plowed him again, breeding him deep and deliberate. Dev’s ass was a jizzy mess, exactly how he wanted it.

Ryan wasn’t done fucking and Dev needed to be pounded out hard to get himself off, so they continued their raw romp, slamming shaft into ass as Dev rode Ryan. Hearing that wet fur and freshly seeded hole slurping around as they screwed was aural electricity. They locked lips and Dev rolled onto his back, letting Ryan annihilate his ass once more. Ryan went all in, hard and hurried, fucking that fantastic load out of Dev’s dick, He plastered his pubes and happy trail, feeling Ryan’s weight on top of him as he came down from his climax. They smiled and laughed and drank each other in, knowing they’d finally sealed the deal they’d so long been pining for. Here’s hoping it’s the beginning of a long, lust-filled friendship.